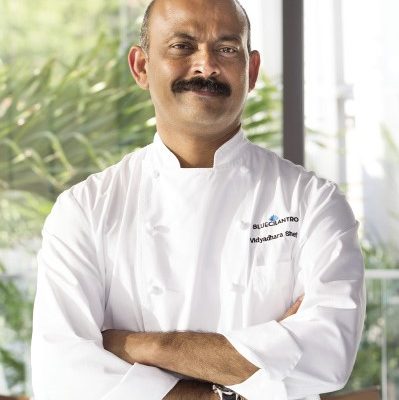 Executive Chef Vidyadhara Shetty with 28 years of experience, orchestrates culinary feats, including superb banquets served in luxurious surroundings and with undeniable panache. Born in Mumbai, India his passion for cooking began as a child spending time in the kitchen of the famous Udupi restaurants, as typically Shetty’s in Mumbai are known for. He was…

Born in Mumbai, India his passion for cooking began as a child spending time in the kitchen of the famous Udupi restaurants, as typically Shetty’s in Mumbai are known for. He was always inspired by the way his father used to work in his restaurant in India. It was admirable to see that with all the hard work and effort put in by his father and his staff, they all still managed to enjoy themselves and laughter always filled the kitchen. His appreciation for the delicate art of blending spices, that is the hallmark of good Indian food, started young – observing and helping his mother cook the dishes.

In 1985 he joined the Institute of Hotel Management, Catering Technology and Applied Nutrition in Mumbai, India. In 1989 Shetty joined the luxury hotel group Ambassdors which includes many locations across India. He then traveled to the Middle East and was introduced to Eastern spices. But over time, a craving for travel consumed him and he cruised the Caribbean as Chef with the Cruise Ships of the Caribbean and spent 5 years gaining experience in Caribbean Cuisine.

He joined the Hyatt Regency Grand Cayman, Cayman Islands in 1994. His dedication paid off in 1999 when he won the prestigious award of “Chef of the Year”.

Even with his challenging schedule, he finds time for the community and participates in various culinary presentations. He is president of the Cayman Culinary Society and he and his team have won numerous awards at various national and international venues each year including the “Best Main Course” in the Caribbean Culinary Competitions in Miami.

His goal as President of The Culinary Society is to offer the top chefs in the Cayman Islands the opportunity to shine in their art and excite the world by creating “authentic contemporary Caribbean” dishes.

‘It is essential, in this fast-paced environment, to be surrounded by a professional and dedicated team’ says Shetty. ‘I am fortunate here on this beautiful island paradise to be surrounded by people who share a genuine love of the kitchen and food.’

Chef Shetty firmly believes ‘quality begets quality,’ using only the best cuts of meat and fish, and freshest and most fragrant vegetables, herbs and spices to prepare his beloved delicacies, turning out succulent food bursting with flavour. Chef Shetty says, “A good chef should always have his heart in the art”. His secret ingredient remains his reliance on the usage of seasonal produce, which he claims inspires his style of cooking. “I can trust them to impart the best flavour and quality which are the basic requirements to prepare a delicious dish.” Chef Shetty looks forward to taking many more guests on an exciting and exotic culinary journey at Blue Cilantro.